In Royal Sutton Coldfield, people voted overwhelmingly to set up their own town council, the largest of its kind in the country, with the ability to raise its own funding via a council tax precept and outside funds.

While critics can say that this town council will basically look after hanging baskets, litter picking and park benches, its supporters say that it will have considerable influence with its views on development, transport and other weightier issues.

The people of Sutton Coldfield have voted overwhelmingly to set up their own town council in a move towards greater independence from Birmingham. Almost 70 per cent of those who voted in the postal referendum chose to set up a directly elected town council. There was a strong turnout of 39.6 per cent of residents in the royal town which is higher than in many local elections. And now Birmingham City Council bosses have agreed they will vote to establish legally the new organisation in September and agree a timetable for elections and the handover of responsibilities.

WE NEED A DECISIVE “YES” TO REGAIN A CIVIC VOICE

To see what a Town Council can do, visit our ‘benchmark’ partner and advisor: www.shrewsburytowncouncil.gov.uk

The Rt Hon Greg Clarke MP, Minister of State, today confirmed in the House of Commons, in reply to the Rt Hon Andrew Mitchell MP, that the people of Sutton Coldfield can make use of the title, the Royal Town of Sutton Coldfield, and this will be recorded for posterity in Hansard.

The Minister’s ruling confirms that Sutton Coldfield has continued to be a Royal Town since 1528 and in the words of Henry VIII, it will be so “forever”.

King Henry VIII signed the Royal Charter for Sutton Coldfield in 1528 and decreed, “And that the same town and village shall forever hereafter be accounted, named, and called, The Royal Town of Sutton Coldfield, in our County of Warwick.”

The people of Sutton Coldfield have campaigned for the official reinstatement of the Royal Town name for over a century.

Government files, available in the National Archives at Kew, reveal civil servants in the Home Office wrongly claimed Sutton Coldfield lost its ancient royal town title when it became a Borough Council under the Municipal Corporation Act of 1883.

There were subsequently two unsuccessful applications to reinstate the Royal Town name. The first application was in 1911 when the Sutton Coldfield Borough Council instructed its Town Clerk to apply to the Home Secretary, the Rt. Hon. Winston Churchill, (later Prime Minister), but the Town Clerk erroneously applied for Sutton Coldfield to be a royal borough. Sutton Coldfield had no historical claim to be a royal borough, it had been a unique Royal Town, and so Winston Churchill refused to make a favourable recommendation to the King.

The second failed application was made in 1973 when the Mayor of Sutton Coldfield applied to reinstate the Royal Town name, but this was at a time when the Sutton Coldfield Borough Council was due to be abolished and the town amalgamated with Birmingham City Council. As such, due to the timing, the legitimacy of the request was questioned, and the Secretary of State refused to make a favourable recommendation to the Queen.

The original Royal Town of Sutton Coldfield name was requested by John Harman, Bishop Vesey, a friend of King Henry VIII. Vesey was born at Moor Hall Farm in Sutton Coldfield. He became a visionary statesman who attended the Field of the Cloth of Gold summit in France, with Henry VIII, King of England, and Francois I, King of France.

When Vesey returned from the Field of the Cloth of Gold he found his hometown of Sutton Coldfield had gone into decline. He requested a Royal Charter from the King which gifted the Royal Town name and a vast royal forest was also given to the people of Sutton Coldfield. The 2400 acre Sutton Park survives much as it was when Henry VIII reputedly hunted in it.

on Jul 31 in News by Transforming Cities www.transformingcities.co.uk

The Rt. Hon. Andrew Mitchell MP has met with Her Majesty’s Private Secretary at Buckingham Palace to discuss the reinstatement of the name, the Royal Town of Sutton Coldfield.

The proposal is to reinstate the Royal Town name by appointing Charter Trustees who will oversee the proper usage of the royal pre-fix.

Speaking to the Sutton Coldfield Observer, Andrew Mitchell said, “My recent meetings with the College of Arms, the Cabinet Office, the Crown Office and the Palace as well as the Garter King of Arms have been immeasurably strengthened by the research undertaken by so many residents.”

One benefit of reinstating the historic Royal Town name could be attracting investment for the regeneration of Sutton Coldfield’s town centre.

The Revival of the Royal Town

John Harman, who became Bishop Vesey, has left a unique legacy. He was born at Moor Hall Farm in Sutton Coldfield, the son of a farmer, 550 years ago. He became a visionary developer, planner, Bishop, and Statesman, who attended the Field of the Cloth of Gold summit in France, with Henry VIII, King of England, and Francois I, King of France.

The Forest of Arden, Warwickshire, with which Sutton Coldfield shares heritage.

Henry VIII befriended Harman and bestowed great favour upon him and his hometown – Sutton Coldfield.

When Bishop Vesey returned home from the Field of the Cloth of Gold he found Sutton Coldfield had gone into serious economic and social decline.

Vesey knew what the potential strengths of his hometown were, for example it had a vast forest and chase full of game – but local people weren’t allowed to hunt in it or even to take fire wood. It had a favourable location in the middle of England – but it lacked a market place, pavements and bridges.

Vesey decided to rebuild Sutton Coldfield upon a set of principles that would address people’s needs and the results have endured for over half a millennium. He encapsulated his strategy in a Royal Charter and a series of measures equivalent to a masterplan.

Henry VIII signed the Royal Charter for Sutton Coldfield in 1528 in which he decreed, ‘And that the same town and village shall for ever hereafter be accounted, named, and called, The Royal Town of Sutton Coldfield, in our County of Warwick.’ 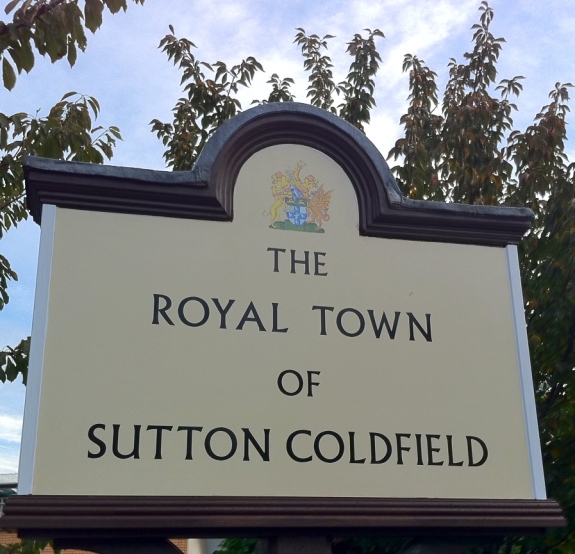 Sutton Coldfield had a unique form of town council in 1528 when Henry VIII, at the request of local benefactor Bishop Vesey, signed a Royal Charter to provide a Warden and Society to ensure people in the Royal Town of Sutton Coldfield could determine their own future.

Following the Localism Act of 2011, a new town council may be created if 10% of the electorate in Sutton Coldfield vote for a governance review. Neighbouring historic towns such as Lichfield, Stratford-Upon-Avon, Royal Leamington Spa, Kenilworth, and Warwick, all have town councils that exist under larger local authorities, and they all appear to benefit from a strong sense of identity, civic pride, and growth in tourism related prosperity.

For a novel inspired by the Forest of Arden, Play Trailer: Arden